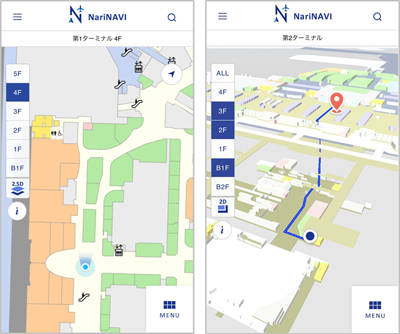 October 3, 2018 At Tokyo Narita Airport debuts the first high-precision localization service in Japan, born from the collaboration between NTT DATA and GiPSTech. 35 million passengers in transit each year thru Narita Airport will be able to move easily and safely in the intricate environments of the airport.

The technology used in the project that will revolutionize passenger mobility at the Narita International Airport, in Tokyo, Japan, is entirely Italian. Developed by NTT DATA on the basis of the proprietary technology of GiPSTech, the “NariNAVI” app  is the first to allow to move safely using an internal localization service that determine your position through geomagnetism.

“NariNAVI” uses geomagnetic positioning to display the user’s current position on his/her smartphone in real time on an airport map, and to provide the user with the best route to the desired destination along with the most relevant localized information. In addition to high-precision micro-location at low infrastructure, NariNAVI also displays a 2.5D map of the three airport terminals, each of which extends over several floors. This intuitive and personalized map will especially help foreigners who visit Japan to orient themselves and move without problems within the airport.

At GiPStech we are really satisfied with the excellent result achieved with this installation both for its extension which is the greatest we have achieved to date, and because, thanks to the active collaboration with NTT Data, it allows us to have a strong presence in one of the markets more attentive to technology and the level of service offered to the final customer. An important goal for a startup, which comes after many months of in-depth analysis and that rewards a technology platform that we are applying for smartphones users in museums, stations, airports and stadiums but also for tracking assets in industrial environments and hospitals

In addition to using the extremely accurate navigation service for passengers at Narita Airport, NTT DATA is considering extending the location service to other areas within the same airport such as operations management, maintenance, assistance to travelers and then make this technology replicable in other places in the world.

Narita International Airport has taken into consideration the idea of ​​an airport navigation app that allows users to locate their position in the terminals in real time, so that foreigners visiting Japan and others visitors can move seamlessly across the airport. A long selection process led to the choice of NTT DATA and GiPStech by Narita International Airport, a choice that makes Narita the first Japanese airport to use an indoor location technology based on the use of Earth magnetism.

NTT DATA is a leading IT services provider and global innovation partner headquartered in Tokyo, with business operations in over 50 countries. Our emphasis is on long-term commitment, combining global reach with local intimacy to provide premier professional services varying from consulting and systems development to outsourcing. For more information, visit www.nttdata.com

We help businesses to create and implement exceptional experiences for their customers. We specialise in online multi-channel technology services.

Time to meet our team of technology and business professionals. Let us help your business reach it’s potential.

We use cookies to ensure that we give you the best experience on our website. If you continue to use this site we will assume that you are happy with it.Ok